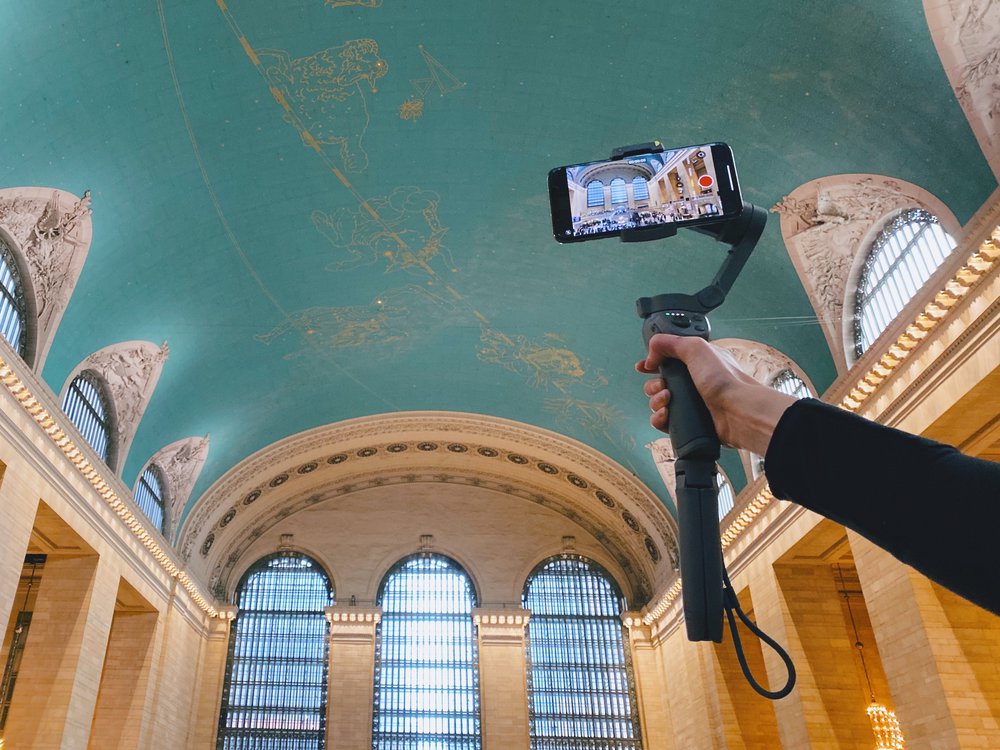 Making Videos for Online Courses with Your Phone like a Pro

We all know the old saying that the best camera in the world is the one that you possess.

It’s more accurate than ever in this era of technology. New era in making videos.

Because smartphones have become an integral part of most people's lives and in recent years, the world of mobile cameras has changed dramatically.

The latest smartphones are more like an all in one production device that offers a legitimate video shooting experience. They’re mounted with very sophisticated lenses and hardware such depth sensors, which allow the users to shoot high-quality videos.

The best example was the movie "Tangerine". Released in 2015, and it was the first film that was shot entirely on iPhones (iPhone 5).

But it’s not only about opening up the camera app and shooting. There are some critical practices to follow to shoot video at a high quality and with a professional touch from a smartphone.

How to Shoot Professional Videos from Smartphones

According to Cisco research, video traffic accounts for roughly 82 percent of overall internet traffic. There’s a lot of video content being consumed online, and to get eyeballs on your video means it needs to stand out and have great production quality. To achieve this, there’s a few major steps:

Defining the Purpose of making videos

There are so many reasons why people create online videos such as tech videos, gaming videos, songs, online courses, etc. It’s imperative to keep the purpose in mind in order to apply settings such as filters via apps that complement the videos.

If the purpose is to create and sell online courses to teach other people, then keep in mind that it can only be lucrative if the videos are high quality and professional looking.

But if the quality of the videos is not good or while recording the videos there is no right camera setting or environment, people will not consider purchasing such courses.

Use an app for making videos

While the latest smartphones have many great features. And in phone capabilities, there are also some fantastic third-party apps with excellent video recording features.

The best part of such apps is that the interface they provide is very similar to professional DSLRs. They enhance the video quality as well as providing you with different filter and customization options to shape up the video just how you’d like it to.

Not only can you record videos from these apps, but they also offer you the editing functionalities to make your online course even better. Some of the best and recommended apps are Adobe Premium Rush and Apple's own app iMovie, FiLMiC Pro

Clean the Lens before making videos

It might sound effortless and silly, but it always makes a lot of difference. People take their mobile phones everywhere with them and use them wherever they are. And this means the lens catches fingerprints and gets oily. It's just like taking off the lens cap from a DSLR. It’s one of those things which is so simple and obvious that people mostly forget.
No one wants to shoot a video with obstructed or foggy camera lens. Just give it a little swab by using cleaning wipes so your video is crystal clear.

Although smartphones don’t offer as many camera functionalities as a professional and dedicated camera setup does. Nonetheless, it certainly doesn't mean that it can’t provide users with multiple types of camera settings at all, and users have to capture only one type of video. In fact, there are multiple options that users can select and change according to the environment to create and sell online courses. Find the list of most essential ones below:

The concept of exposure shows how bright or exposed the lighting of the video is. It allows the users to keep their videos from over and underexposed shots. It’s typically controlled by the aperture mechanism, and it works the way a human eye does by controlling the amount of light that passes through the camera lens to hit the camera sensor.The exposure feature is traditionally right inside all the camera apps when the camera feature is running.

Most of the flagship models come with the unique feature of night mode. And it uses artificial intelligence to evaluate and analyze the environment a user wants to capture. There are multiple factors that the night mode takes into account, such as the smartphone's movement, the light in the environment, and the object's movement in the frame. It takes multiple shots and merges them all together to produce detailed results for your video. If you happen to be in low-light conditions, then this mode is critical.

Using Flash or a dedicated light

The built-in flash feature of the camera that brightens the environment. But the drawback of using the flash is that it consumes too much battery. Another viable option is to purchase a dedicated light to make the videos brighter. It will also keep the battery healthy intact.

There are also different types of video formats that a user can record. You can easily select different modes by going to the setting of the main camera app. If a user is using a third-party app, s/he can look up the main page when the camera is running or the settings tab to access all the different modes.

The default recording mode is traditionally 30 FPS in most of the mobile cameras, and it’s the standard frame rate that best works with a smartphone's resolution. Our eyes perceive everything at 24 FPS, and most of the movies are made at this frame rate. The shift from 24 FPS to 30 FPS helps make the video more fluid. But both options are viable, and the difference is more of an aesthetic one. But the only way to shoot 24 FPS from the smartphone's camera is to use a third-party app such as FiLMiC Pro.

This option is only recommended when a user has to show a whiteboard or something similar in the online course videos and needs to notch fluidity. Because a video at 60 FPS makes the video file considerably very big.

Not all the mobiles are capable of capturing 4k videos. The typical resolution of this video mode is 3840 x 2160. The critical thing to keep in mind is that this mode is not a default one. You have to choose it manually by going to the camera setting. It’s not a viable option to shoot in 4K because most people don’t select the 4K video option while watching any video over the internet. But there are some benefits of shooting online video courses in 4K such as:

· Future-Proofing: It will not take long when the 4K is the most used video format over the internet.

· More Details: 4K videos capture so many details. You can convert it to 1080 resolutions, which offer better quality as compared to the video shot in 1080.

Another feature that the latest flagship smartphones come with is that the camera uses an accelerometer and gyroscope to counteract all the unwanted movements and keep the video smooth and stabilized. It’s known as electronic image stabilization, and there’s a price that a user has to pay for using this feature. As the camera crops the video in order to compensate movements, it also decreases the quality of the video. At this point, the best option for all the online course creators is to use a tripod or camera holder.

Post editing is by far the most subjective and critical aspect of video shooting from smartphones. It provides the videos with such a quality where it appears to be captured from a dedicated professional camera. Some excellent smartphone video editing apps are available and you can use them for this purpose, such as Adobe Premium Rush,iMovie, Quik App, Splice, etc.

All of these apps come with some built-in effects that can entirely change the look and feel of any video. In simple words, these apps can automatically create a full-fledged edit for any video, and it’s possible to tweak these edits as well. If a user wants to provide his/her videos with more enhanced and advanced features, then s/he will have to spend some extra money on the paid versions of these apps.

This guide contains the basics of capturing videos from smartphones that everyone should have under his/her belt. These tips are for any content creator to start learning how to create an online course with a professional look and sell them to his/her audience.

SEE HOW GURUCAN CAN HELP YOU

Components organized in one place

Thank you! Your submission has been received!

Join our ever growing community. Join us on Discord